Researchers at the Pacific Centre for Isotopic and Geochemical Research (UBC EOAS) use geochemical tools (trace metal and isotopic analyses) to show that some of the lead released during the April 2019 fire at Notre-Dame cathedral in Paris is present in urban honey collected downwind of the fire. In the study published in Environmental Science and Technology Letters, Kate Smith and Dr. Dominique Weis collaborated with researchers in Paris, including apiarists from Beeopic, an urban beekeeping company that manages over 350 hives in Paris. Thirty-six honey samples were collected from all over Paris three months after the fire. The results of the post-fire honeys were mapped (i.e. downwind from the fire vs. elsewhere in the city) and compared to honey from pre-fire Paris and elsewhere in France. You can read full summaries of this study at UBC Science and in the New York Times.

Photo caption: Sibyle Moulin, a coauthor of the paper and apiarist with Beeopic, stands near beehives on the sacristy rooftop of Notre-Dame. These bees survived the fire. Photo credit: Beeopic 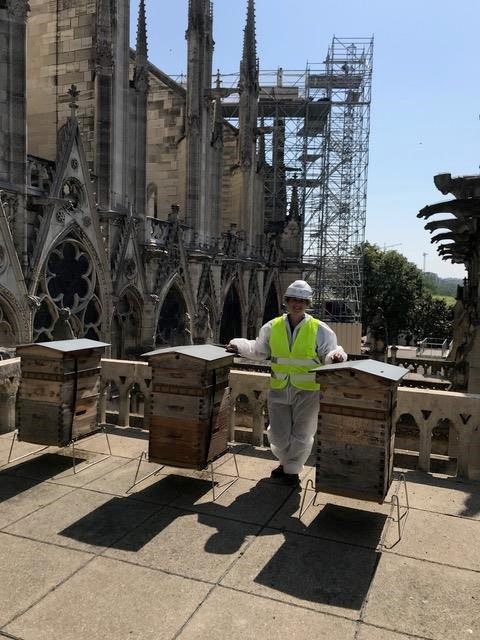 Mixing lasers and archaeology to tell stories with stones