October 14, 2022
Viruses and bacteria in a drop of seawater from the Arctic Ocean stained with a fluorescent dye (credit: Jerome Payet)

Viruses are extremely abundant in the ocean and they play a major role in causing mortality of microbes, including heterotrophic bacteria and phytoplankton. It has been estimated that viruses kill about 20 to 30% of the living biomass in the ocean each day. But what specific microbial taxa are undergoing viral lysis in the ocean, given that there are thousands of them?

EOAS Research Associate Kevin Xu Zhong, along with his co-authors (Jennifer F. Wirth, Research Associate at Montana State University; Amy M. Chan, EOAS Research Scientist; and Curtis A. Suttle, EOAS Professor), tacked this problem by establishing the use of extracellular ribosomal RNA (rRNAext) (see the diagram below) to estimate taxon-specific cell lysis of microbes. Their work has just come out in the ISME journal on October 8, 2022 and they shared their story behind the paper in Nature Microbiology Community.

“For years, we were surprised by large amounts of ribosomal RNA (rRNA) “contamination” in 0.22-µm filtered seawater that was used for viral studies," said Kevin. "We hypothesized that rRNA was released by cell lysis, and that this rRNAext could be sequenced to reveal the taxonomic composition of the cells that had died.” By conducting laboratory experiments with marine bacteria, their viruses and grazers (see below for experiment procedure), Kevin and his team confirmed that rRNA are released into the surrounding water by microbial cell lysis. This rRNA can be sequenced, i.e., MoRS - mortality by ribosomal sequencing, and used as a proxy for taxon-specific viral lysis. 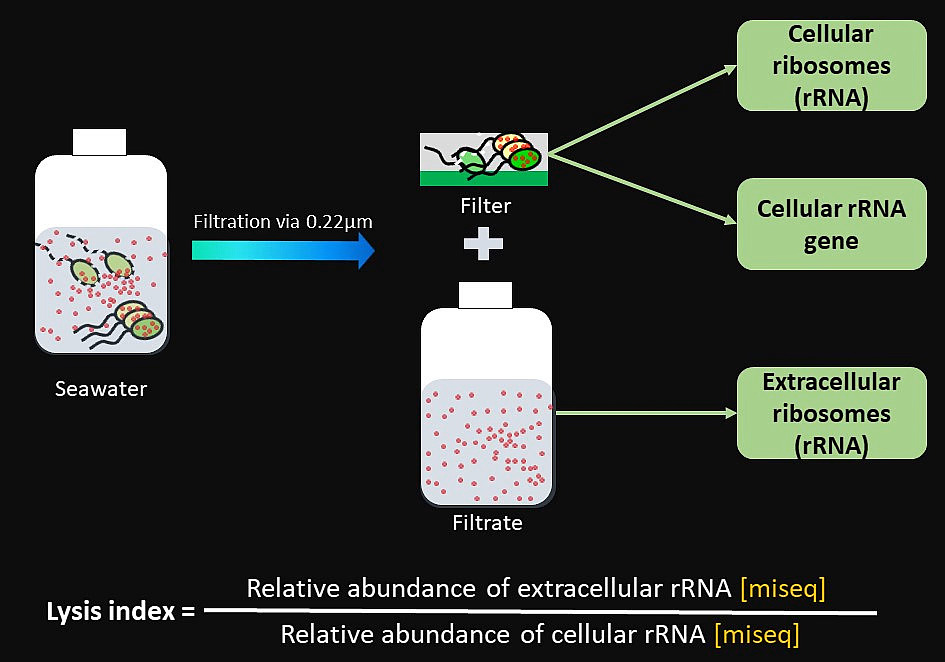 “Moreover, by standardizing to the cellular rRNA we have an index of cell lysis, relative to the amount of rRNA associated with each taxon, while the cellular rDNA provides a proxy for the relative abundance of each taxon,” said Dr. Suttle.

“MoRS offers a powerful new approach for understanding how taxon-specific lysis shapes microbial communities and processes, and provides an important tool in our efforts to explain the distribution and abundance of specific microbial taxa in nature,” said Kevin.

To learn the Behind the Paper story in Nature Microbiology Community: https://microbiologycommunity.nature.com/posts/extracellular-rrna-provides-a-window-on-taxon-specific-microbial-cell-lysis
Read the article here: https://www.nature.com/articles/s41396-022-01327-3