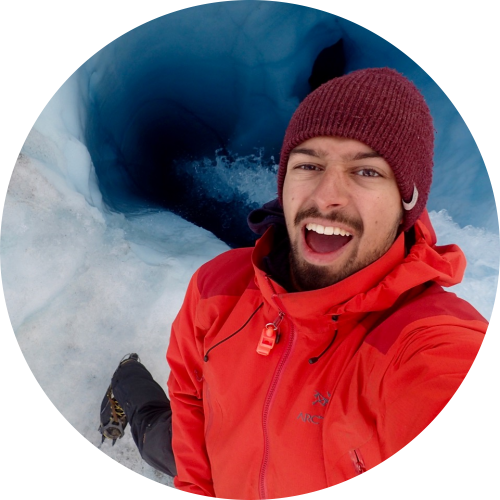 My current research investigates the dynamics of explosive volcanic eruptions, ash clouds and ash sedimentation. In particular, I focus on the stability of explosive eruption columns, which can generate deadly pyroclastic density currents and surges when they collapse or feed spreading ash clouds in the atmosphere that disrupt air traffic and affect global climate. My approach draws on a fluid dynamics perspective to form a fundamental physical understanding of the multiphase flow dynamics governing eruption column stability. To stay grounded in reality, I combine this perspective with real-time doppler radar observations of short-lived explosive eruptions and observations from field-based volcanological studies of explosive eruption deposits. My goal is to understand the journey of small, intermediate and large sized particles from the volcanic vent, through the atmosphere (or ocean) and finally back down to Earth's surface.

Check out my personal website for more about me and research and my Twitter feed for the latest volcanology news I'm following these days.

Sediment waves and the gravitational stability of volcanic jets

Dr. Mark Jellinek and I have built on the methods of Carazzo and Jellinek, 2012 and Jessop et al. 2016 to investigate the effects of intermediate sized particles on the dynamics of more frequently occurring Plinian eruptions, such as the eruption of Mt. Vesuvius in AD 79 in which column collapse destroyed the cities of Herculaneum and Pompeii. We focus on the transition of Plinian eruption columns from a stable Buoyant Plume regime to a gravitationally unstable Total Collapse regime through a Partial Collapse regime, following the pioneering work on the "transitional" (Partial Collapse) regime of Plinian eruption columns by Neri et al., 1992, Neri et al., 2002 and Di Muro et al., 2004. Going one step further in experimental complexity than previous studies, our sand-laden water jets are injected with steady source conditions into a tank with a linear density gradient that has saltwater at the base changing continuously to fresh water at the top. This allows us to investigate how multiple cloud layers can spread from the jet column and the top of ground-hugging gravity currents, both of which have implications for ash spreading and sedimentation in the atmosphere presenting hazards for aviation. Excitingly, our work led to the discovery that multiphase jet columns collapse periodically as annular waves of sediment that drive the formation of multiply-layered clouds and axisymmetrically-spreading ground-hugging gravity currents. A serendipitous discovery is that sediment waves emplace deposits with axisymmetric and regularly-spaced terraces, which are potentially analogous to those found around shallow submarine calderas such as Santorini, Greece and Sumisu, Izu-Bonin arc. Crucially, our work shows that Plinian and Ultraplinian eruptions predominantly occur in the Partial Collapse and Total Collapse regimes where sediment wave dynamics are a key process linking eruption source parameters, column height fluctuations, distinct ash cloud structures, complex sedimentation processes and deposit architectures diagnostic of eruption regime. A peer-reviewed journal article "Sediment waves and the gravitational stability of volcanic jets" published in the Bulletin of Volcanology describes this work in more detail where videos of our experiments can be found in the supplemental material. 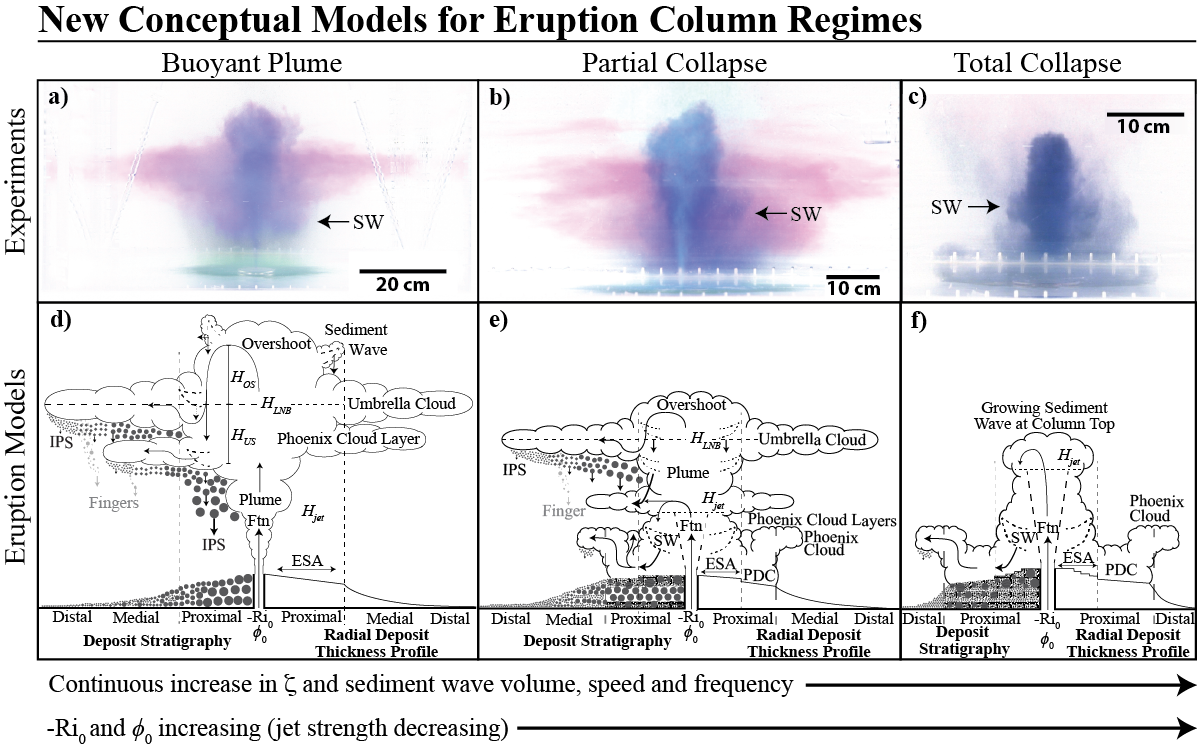 Following pioneering work on turbulent plumes by Morton et al., 1956, analogue experiments of volcanic jets by Carey et al., 1988, and many studies since, I conduct new analogue experiments that test the effect of intermediate sized particles on jet column stability. These particles have a complex coupling with their carrying fluid and affect the ability of an eruption column to mix and dilute with the surrounding atmosphere. As a result, they play an important role in column stability and the initial conditions of ash clouds spreading in the atmosphere, the latter being an important input parameter for sophisticated ash transport models that predict hazards for air traffic. My previous work performed with Dr. David Jessop, Dr. Mark Jellinek and Dr. Olivier Roche investigated the effect of these particles when injected from annular vent geometries as expected to occur during catastrophic caldera eruptions. We have shown that these particles can enhance entrainment and in turn inhibit column collapse during Catastrophic Caldera-Forming explosive eruptions, whereas lower aspect ratio caldera ring vent geometries can do the opposite. The largest of these caldera-forming eruptions have not been witnessed with modern scientific instrumentation, therefore our understanding relies on analyses of their deposits, computer simulations and our analogue laboratory experiments. Further analogue experiments investigating this style of eruption can help us predict their effects on the global climate and in turn their threat to life on Earth.

My PhD was a co-tutorship PhD funded by UBC and the Université Clermont Auvergne (UCA), France. My supervisor, Dr. Mark Jellinek (UBC), is an expert in geological fluid mechanics and explosive eruption dynamics and my co-supervisor, Dr. Franck Donnadieu (UCA), is a Doppler radar specialist who has pioneered the adaptation of focused beam Doppler radar methods to the study of volcanic plumes and ash clouds. In 2020 we published a paper led by Dr. Valentin Freret-Lorgeril that studies how ash settles from low concentration ash clouds erupted from Mt. Stromboli, Italy. We find that the ambient wind leads to the formation of ash-laden fingers descending from the base of Strombolian ash clouds, thereby causing ash to reach the ground faster than it would if it settled individually, which is the standard model for ash settling.

In May, 2018, Dr. Donnadieu, Dr. Jellinek, Dr. Freret-Logeril, fellow UBC PhD student Colin Rowell and I all participated in a two-week field campaign to study frequent, yet short lived Vulcanian eruptions from Sabancaya volcano, Peru. Camping at 5000 m elevation in an arid and cold climate, we monitored the wide range of eruption styles with real-time visual, thermal and Doppler radar methods in addition to measurements of ash sedimentation directly with an optical disdrometer and ground sampling. Currently, we are processing the data for comparison with new analogue experiments that simulate Strombolian and Vulcanian eruptions in a saltwater tank. Check out my interview with Bob McDonald of CBC radio's Quirks and Quarks podcast for an 10 minute overview of our Peruvian volcanology adventure! 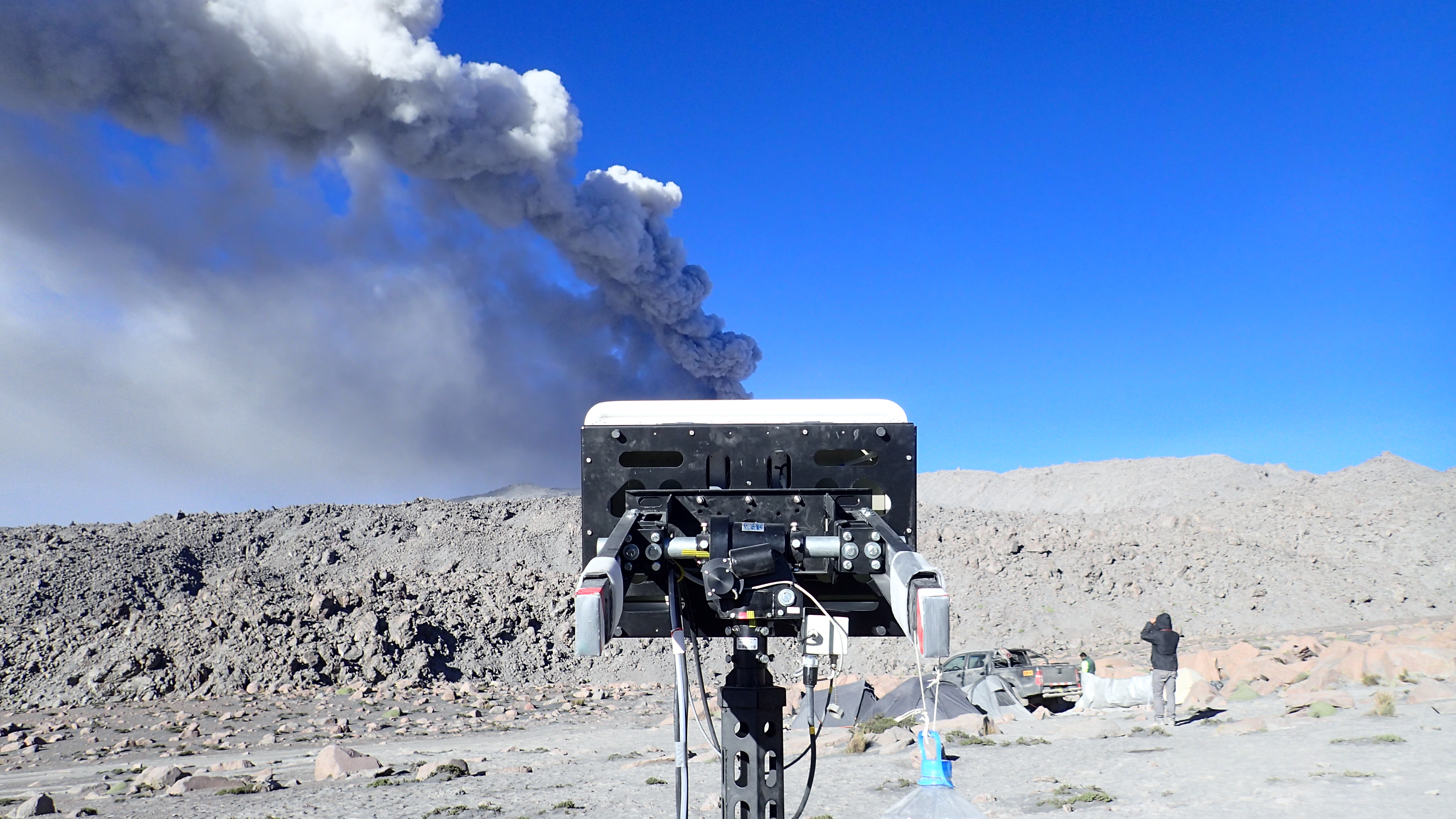 Past Research in Glaciology

My past research has included several glaciology field campaigns with Dr. Christian Schoof aimed at probing the subglacial drainage networks of glaciers in Kluane National Park and Northern British Columbia. This research involved hot-water drilling hundreds of meters through glacier ice and installing pressure sensors that monitor subglacial pressure variations through the seasons. This research is critical for understanding whether or not subglacial drainage is concentrated in established channels with high flow rates or spread out via sheet flow under the glacier, the latter of which can reduce basal friction and enhance sliding glacier velocity. Part of this work included deployment of ice penetrating radar to determine the depth of the mighty Kaskawulsh glacier, found to be deeper than 600 meters, our instrument's max depth resolution at the time, moving towards the center of the glacier. Picture below: Resetting a GPS station with the intrepid and most-clever Camilo Rada. 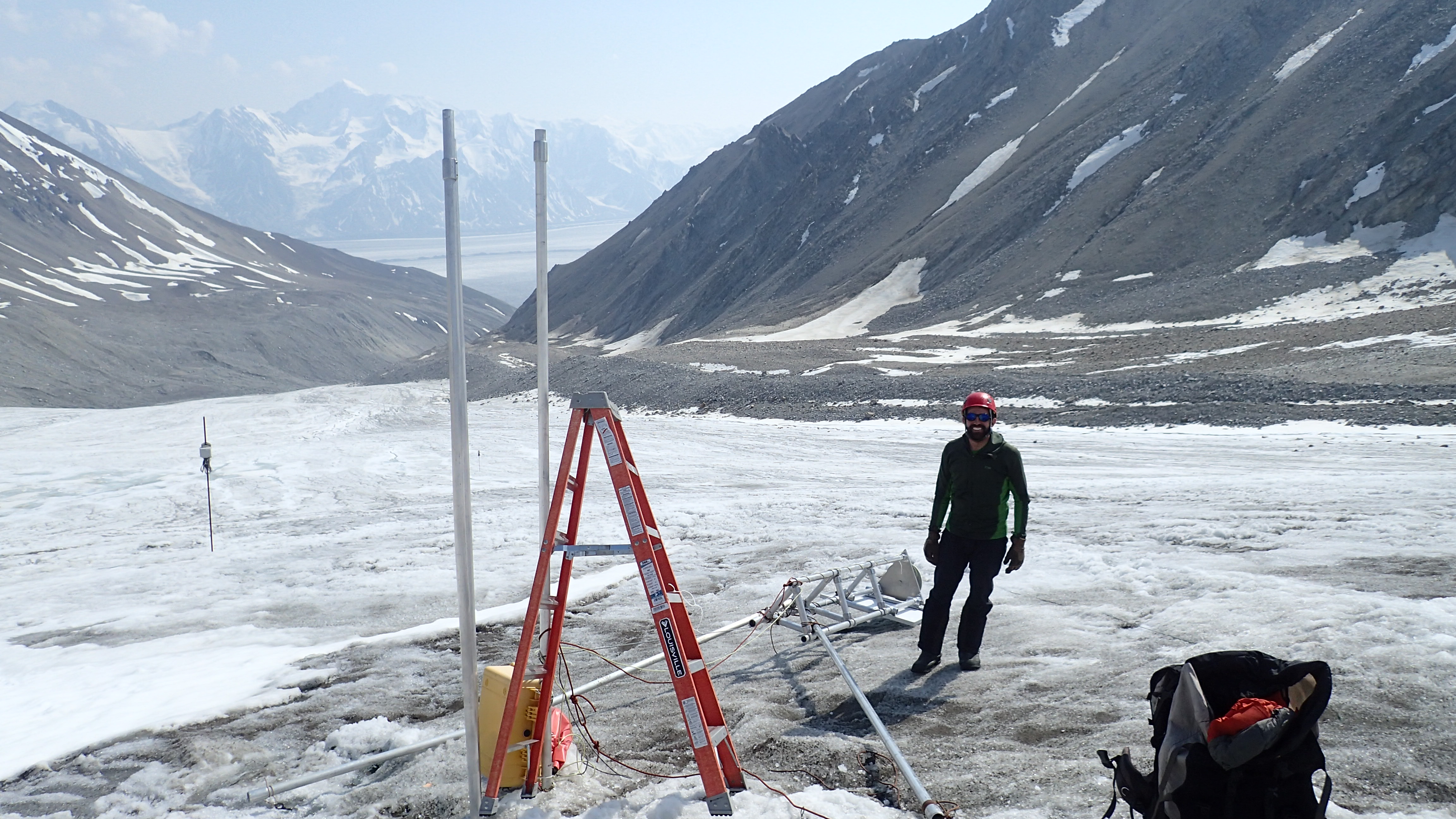 EOSC 212 · Topics in the Earth and Planetary SciencesEOSC 442 · Climate Measurement and AnalysisEOSC 211 · Computer Methods in Earth, Ocean and Atmospheric Sciences