An expedition to one of the windiest places on Earth

This month, EOAS assistant professor Anais Orsi and her team are headed to site D47 within the Adelie Land, one of the windiest places on Earth. The harsh conditions of the site, located on the steepest slopes of Antarctica, are precisely what brings the team to D47, where they will be investigating how strong winds shape Antarctic ice sheets and how gasses trapped in ice cores can be used to reconstruct previous wind conditions over the past 100 - 200 years.

The fierce winds at site D47 form when very cold, dense air coming from the center of the continent falls down the steep slopes, creating what is known as ‘katabatic’ winds. These winds pick up and carry snow over the surface of the ice, forming snow dunes in their wake called sastrugi. While the size and orientation of the sastrugis indicate the direction and strength of the winds, they also cause the accumulation of snow over the ice sheet to be patchy, making it difficult to interpret shallow ice cores. As the winds continue to blow downhill, the air warms up and can hold more water vapor, causing the snow carried by the wind to evaporate. While it is clear this process results in a net loss of mass from the ice sheets, it is not yet clear how important this effect is on the ice sheet. Orsi’s team will study these effects using a water isotope laser spectrometer supported with an array of meteorological instruments to measure turbulence caused by the wind and associated moisture transport. 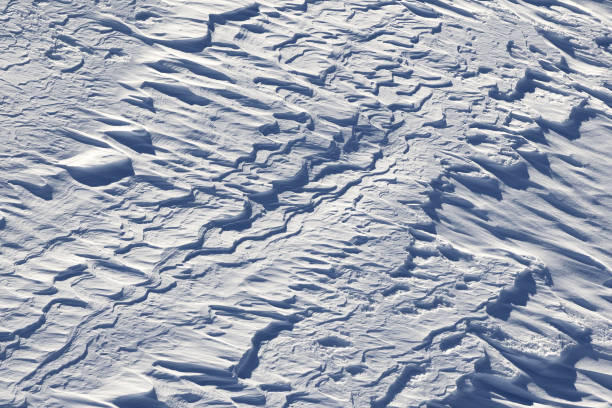 A sastrugi formed in the Canadian Arctic. (Stock image)

To examine the longer term variability of katabatic winds, the team will extract 150 - 200 meter ice cores containing ice up to 100 - 200 years old. Air bubbles are trapped within the cores due to the porosity of surface snow, and contain a combination of lighter and heavier gas elements. When winds are calm, the heavy gasses sink to the bottom of the snowpack. By looking at the distribution of light and heavy gasses recorded in the ice core, Dr. Orsi hopes to reconstruct a timeline of previous strong wind events. These measurements will be the first of their kind, potentially providing greater understanding of katabatic wind variability over time.


Following phase one of the expedition, the team will trek through the continent to a slightly less windy study site known as ‘Little Dome C’ where they will join fellow paleoclimatologists. Despite the milder winds, Little Dome C is even colder than D47, with temperatures as low as -40oC. The oldest ice core to date, containing ice over 800,000 years old, was extracted from Little Dome C. However, paleoclimatologists are hoping to find even older ice to study the causes behind the changes in Earth’s ice age cycle periodicity. Previously, ice age cycles were regularly spaced every 41 thousand years, but since the mid-pleistocene transition, 1.5 to 1 million years ago,  they have become more intense (colder), but less frequent, returning every 100,000 years. CO2 and other atmospheric gasses trapped in the ancient ice contain clues that can reveal the changes in Earth’s climate that precipitated this shift in ice age cycles. Dr. Orsai’s team will contribute to the project by characterizing how gasses become trapped in the ice at this particular site and how the milder winds affect the surface ice topography in this region.