Insights Into the Origins and Compositions of Mantle Plumes: A Comparison of Galápagos and Hawai‘i

March 4, 2021
Insights Into the Origins and Compositions of Mantle Plumes: A Comparison of Galápagos and Hawai‘i

At the Pacific Centre for Isotopic and Geochemical Research, we performed new, high-precision analyses on isotopes of Pb-Sr-Nd-Hf for 83 samples from the Galápagos islands and compared them to data of similar quality from Hawaiian volcanoes. Both island chains are formed by mantle plumes that are rooted in the deep mantle and that play significant roles in mantle dynamics. This work is exciting because it shows comparable mantle plume structures and geochemical sources for both volcanic island chains: 1) both plumes are compositionally split into two halves and the volcanoes that form above either half have unique isotopic compositions, 2) both plumes straddle the boundary between the Pacific large low shear velocity province (LLSVP) and the ambient Pacific lower mantle, 3) the isotopic compositions of their volcanoes converge at a common composition representative of the average lower Pacific mantle (‘PREMA’), and 4) both plumes incorporate material from the Pacific LLSVP but erupt very different isotopic compositions from these plume domains (‘EMI’ and ‘HIMU’), which suggests that the Pacific LLSVP is more heterogeneous than previously thought. Studies like this that assess the composition Earth’s mantle are important to help us understand how the entire Earth system works. 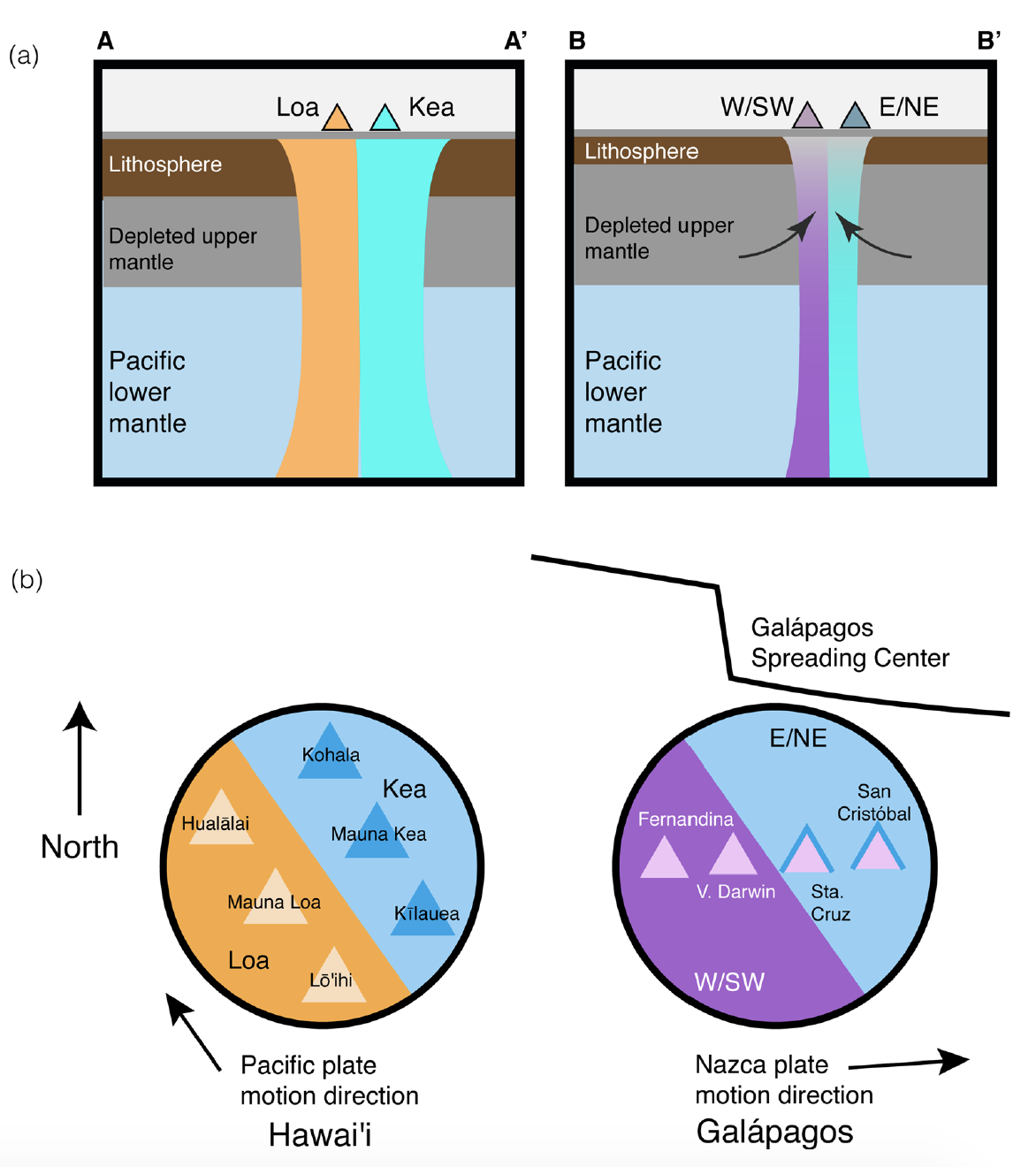 Schematic diagram showing a side-view and plan-view of the Hawaiian and Galápagos plumes. Each plume consists of two main isotopic halves coloured orange and purple for those originating from the Pacific LLSVP and blue for those originating from the ambient lower Pacific mantle. Direction of plate motion is indicated in both cases and influences how the isotopic domains in the plumes are expressed in the overlying volcanoes – e.g., as a double geochemical chain for Hawaiian volcanoes and as stacked geochemical layers for Galápagos volcanoes.